What Every Defendant Needs to Know About How to Make Bail 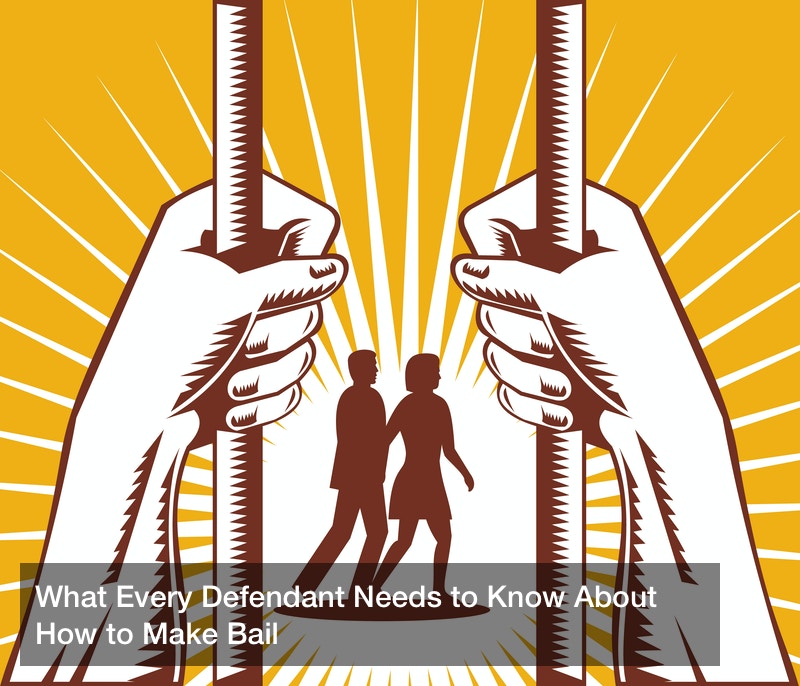 What Every Defendant Needs to Know About How to Make Bail

Millions of people are arrested every year for a wide range of reasons and many of those millions have the same question in mind “how do you make bail?’ Bail is a time-honored system in the United States that allows people to be released from jail while they are awaiting trial.

Bail is a process that typically involves a bail bondsmen. One of the easiest answers to how do you make bail is to call a bond service. Learning more about the process can help you to make informed decisions should you ever need to make bail.

The idea of paying to get out of jail while you await a trial is certainly not a new idea. The process was brought over from England. The basics of bail is that you pay a fee (or bail bond services puts up a surety bond for you) and you get out of jail to participate in your defense.

Some people that are arrested often wonder not only how do you make bail, but also, why do I have to pay bail in the first place. That question is actually being litigated in many states. The idea is if you are innocent until proven guilty, one of the most important tenets of our legal system, why do you need to pay to get out of jail.

While many states are making decisions about their bail system, bail is still very much a fact of life. There is no law that says you have to pay to get out of jail, but if you do not want to sit in jail until your trial and the court is requesting some sort of collateral (bail) to ensure you show up for court, then you will need to learn how do you make bail.

Bail is typically determined by several factors including:

The eighth amendment to the Constitution of the United States adopted in 1791 addresses the issue of bail and how it should be exacted. According to the eighth amendment the federal government is barred from “ imposing excessive bail, excessive fines, or cruel and unusual punishments” however, “excessive” is a pretty loose term. In other words, there is no legal definition of what can be considered excessive bail.

A cash bond of a few thousand dollars may not be a lot for one person while a cash bond of a couple of hundred dollars would be way more than another can pay. In most cases, the amount of bail will fit the risk of “flight” which is addressed by establishing community ties. In cases of very serious charges, bail does not have to be offered at all. There is no law that states everyone is entitled to bail. The eighth amendment only addresses excessiveness, not the “right to”.

Understanding how do you make bail is only part of the equation. You need to also understand even with immediate bail bonds, this is only a conditional release. That means bail is not a “get out of jail free” card.

A criminal defense lawyer can help you to better understand what is expected of you while you are out on bail that is unique to your situation, but generally, there are always conditions of release imposed by the court.

Learning how do you make bail goes hand in hand with fully understanding what is expected of your when you do make bail. The bail bonding agent will go over all the expectations with you and the repercussions of not meeting those expectations.

Conditions of your bail are usually pretty simple. For example, if you have been accused of a crime that involves a victim, one of the golden rules of being out on conditional release, is to stay away from the purported victim. This means do not try to work with the victim outside of the court, do not try to convince the victim to drop the charges, and never ever approach the victim.

For cases like a DUI charge, do not drink and drive, obviously. Another example of conditional release requirements is if you have been charged with trespassing do not return to the property, even if you have personal property there.

The minute you are released from jail start following the conditions for two reasons, first, it will keep you out of jail, and it will bode well for your upcoming court trial. The last thing you need is to spend the money to get out of jail, only to have the bail revoked for breaking one of the conditions of your release.

Your attorney is the expert in criminal law that can best explain what can happen if your bond is revoked but it is a conversation you do not want to have. If you are wondering how do you make bail, add on to that question, how do you make bail and stay out of jail when you speak with your lawyer.

There are two ways you can make bail. You can make bail on your own or you can use an emergency bail bonds service to get you out quickly. Each option comes with its benefits and its cons. Let’s investigate each option.

the First option; how do you make bail on your own. The magistrate will set the amount of bail you need to pay to get out of jail. For argument’s sake, let’s say it is $5,000. You can hand over $5,000 in cold hard cash (for a cash bond you will need to) or you can post property (real estate) that is valued at $5,000 or more.

Now for the downside of how do you make bail on your own. First, if you use property, and anything goes wrong, you are risking losing that property. Typically, it is the family home or someone’s family home that is put up, which means, if something goes wrong, they lose the property. Sounds a little crazy that you can lose a $200,000 house for $5,000, it can and does happen a lot.

In some cases, the property is forfeited because the accused just takes off or to use a more accurate legal term “absconds” leaving the homeowner holding the bag. In other cases, the defendant does not meet all the conditions of release and the bail is revoked and the property forfeited that was put up for the bond.

It can be a risky business making bail on your own. The next option is how do you make bail with a bail bond service.

This is the more used option. When you make bail with a bail bond service you will have to pay a fee. The fee is a percentage of the overall bond. Let’s use that $5,000 bail as an example again. In some cases, the fee can be 10% in others the fee can be 15% of the face value of the bond.

You will have to hand over between $500 and $750 to the bail agent to get you out of jail. Here is where things differ. Even if you are found innocent, and adhere to all the conditions of your release, the money is never returned. That percentage of the bail is collected as a fee.

The bail bond agent assumes all the risk for you, and in exchange, you pay them for that service. Some bail agents will work with you on paying off the fees. They will require some money upfront and allow you to make weekly or bi-weekly payments.

In both cases you can use credit cards or debit cards to pay the fees. For most people, the bail agent is simply the smarter financial move. When you want to make bail and you use an agent instead of paying the money upfront out of pocket, you do not have to tie up large sums of money.

How Do You Make Bail When You Are Broke

Unfortunately cash does seem to be king in the world of bail bonds agencies, but there are some agencies that will accept collateral instead if you are strapped for cash. For example, some agents have been known to accept car titles, jewelry, and other things of value to write a bond.

Other options for how do you make bail when you are broke include:

On the upside of things many times when a defendant cannot figure out how do you make bail when you are financially strapped, they are often given “time served” when found guilty for minor charges with minimal sentencing.

Ultimately the bigger question than how do you make bail, is should you push to make bail, and the answer is a resounding “yes”. Why is it so important o make bail if you can? The answer is simple, it is a much better scenario to be out on bail, do what you are supposed to, and show the court that you are an upstanding citizen.

Of course, it is a lot easier to help your defense attorney prepare a legal strategy and a winning defense if you are out on bail. Actively participating in your defense by following your attorney’s recommendations can help you to get a better outcome in your case. For example, let’s use a DUI charge again as an example.

If you are out on bail you can take classes, go for a substance abuse evaluation, and take other preemptive steps recommended by your attorney that they have learned from their experience bodes well in court. If you are sitting in jail it would be impossible to do anything to further your case on your own behalf.

Is the bail system fair? Probably not. There are quite a few legal questions about the fairness of bail and how it is skewed toward the wealthy while it greatly punishes those that are not wealthy, but the fact is, as of right now, it is the only system in place.

If you want to learn more about how do you make bail, and all the things that go along with making bail, contact an attorney.