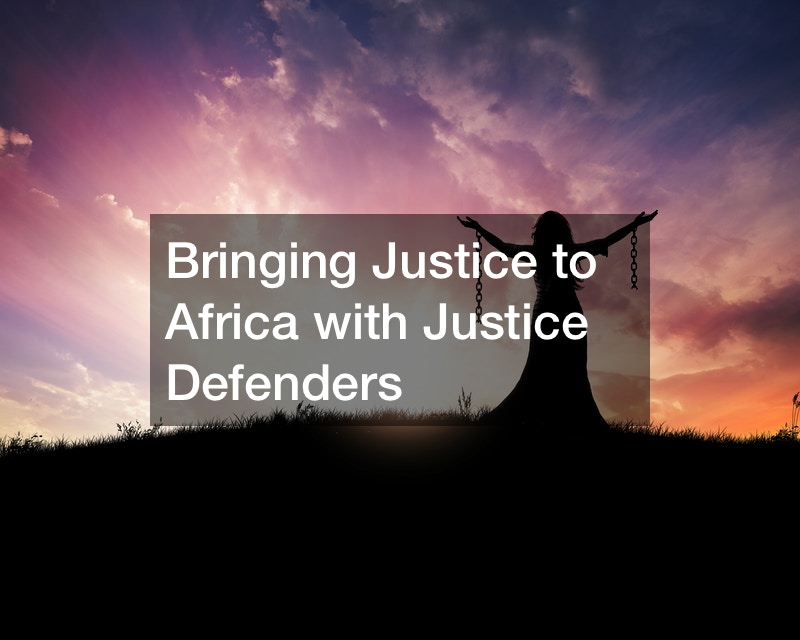 In the United States, when you are charged with a crime, at the very least, you know you will have a lawyer to represent you in court. You know that there are laws in place that are a framework for the type of punishment you can receive. The justice system in Africa offers none of the protections that you find in the US.

The Cost of an Unjust System

There is a global crisis that many people are not aware of. While the justice system in Africa is in shambles, it is not the only place in the world where the accused do not have access to criminal defense attorneys to plead their case.

The justice system in Africa is froth with corruption but is really the tip of the iceberg when it comes to global justice system problems. Right now, there are over 5.1 billion human beings that are being failed by their justice system.

Over 250 million people live in conditions of extreme injustice. Over 10 million people are currently confined in prisons worldwide, with over 3 million of those people lacking access to criminal law attorneys to help defend them against charges.

The justice system in Africa truly is non-existent and is a sad representation of the bigger problems of global injustice. In the United States, we take things for granted. If we get pulled over for a traffic violation, we know if we plead not guilty to the charge, we can find legal assistance to help fight the charge. In many countries worldwide, a traffic violation or other small violation puts you directly in jail, where you may wait months to get before a judge.

In the United States, there are lawyers for everything. If you are injured in a car accident, you hire an injury lawyer. If you buy a house, you hire a real estate lawyer, want a will, hire a wills lawyer. You get the idea, we have ample legal protections in our country and experts in every area of the law to help us navigate those protections.

The brutality of pre-trial detention in the justice system in Africa and other places worldwide puts a tremendous strain on the poor, the family units, and the economies in these countries. In Africa, when you are arrested, you go right to pre-trial detention. The cells are overcrowded with men, women, and children. The conditions are at best austere. At worst, they put you in life-threatening situations. Imagine you are arrested for going through a red light that you did not notice, you are immediately taken to jail and housed with anyone else that has committed a crime, no matter what that crime was.

The authorities in charge of the justice system in Africa speak English only. Many of those charged with a crime in Africa do not speak English. They have never been exposed to college education programs, and many of them are simple people who do not understand the charges or what they need to do to fight them. They just sit in jail. Imagine not understanding what you did wrong or being unable to understand what you need to do to fight back.

No Jury, No Justice

In the United States and other countries, being tried by a jury of your peers is the norm. The justice system in Africa does not have standardized rules for jury trials. Many sub-Saharan countries leave the decision of guilt or innocence in the hands of a single judge, without representation by criminal law attorneys, in many cases. Remember, the judge speaks English, which is the courts’ official language, while most defendants do not. One person is given all the power over guilt, innocence, and sentencing. Of course, getting before a judge takes months, sometimes years.

The justice system in Africa is not full of criminal defense attorneys working toward getting their clients released because, in most cases, the effort is futile. In the United States, at any given time, there are millions of lawyers on their way to court to stand before a jury in defense of their clients.

The justice system in Africa offers no “state-appointed” criminal defense attorney, no jury of your peers, no translators to help you understand what is being said. It is a bleak situation.

The Poor Suffer the Most

Being indigent in Africa in and of itself seems to be the biggest crime. The justice system in Africa is already a mess, but it’s worse if you are poor. There is no law firm waiting to help you. In Africa, prisons are hidden, no one in the communities knows much about them. Destitute families do not have the means to travel and get to the authorities to ask questions about their loved ones.

Poor families certainly cannot afford to pay for a criminal defense attorney. In most cases, they would not even know where to start to find one. Their loved one is literally left in prison many times for crimes that they did not commit. The poor do not have a voice in Africa.

In African families, every member plays a vital role in the success of the family. For example, the men work, hunt, and put food on the table. The women may be in charge of growing food, making sure there is safe water for the family, and take care of the children. Every person plays a vital part in that family’s well-being. When a person is detained for a crime they did not commit, the effect on the family is devastating.

The State Appointed Lawyers In Africa

There are a handful of state-appointed lawyers, who are largely inexperienced, overworked, and rarely even read the case file. They go along to get along in the court system at the expense of the person they are supposed to represent.

No one that is incarcerated puts too much hope in any state-appointed lawyer because they know they are simply a number to them. It is a dire situation. People literally die while they are waiting for legal help in prison in Africa.

Justice Defenders Are Making a Difference

The organization comprises incarcerated people, lawyers, prison officers, judges, and allies that are focused on changing the justice system in Africa. This grassroots project started as a project to take care of prisoners who were forgotten by society. Many prisoners needed medical care and were dying from a curable disease, and no one seemed to care.

Volunteering in the prisons to care for the incarcerated led to bigger questions, like why were so many poor people incarcerated for what seemed to be small infractions of the law? Why was the scale so unbalanced in the African prison system? Members of the poorest, least represented communities were wasting away in prison for minor crimes, while the wealthy people had all the power over their fate.

From the founder of Justice Defender on why they shifted their model from making prisons better places to attacking the stem problem, the justice system in Africa, “We discovered shocking information, like the fact that up to half of prisoners are innocent. We saw that no matter what we did to improve the welfare of people in prison, if they didn’t have justice, they wouldn’t have peace.”

In 2017 Africa Prisons Project became Justice Defenders and changed models from prison reform to justice reform. Of course, the bigger problem was how do you reform a justice system? Education became the focus of this organization. Not only educating the world community about the problem, but educating community members about the laws and teaching them how to defend themselves and other community members in court.

Training people within the community, including prisoners, ex-prisoners, and anyone who wants to affect change, can make a tremendous difference. Prison guards and other members of the justice system in Africa have a wealth of knowledge that is typically not tapped into. Justice Defenders aligns with those people that are already in the system to help train community members to make the changes that are needed in the justice system in Africa.

This unique model is making a big difference in people’s lives. The impact that this program has had is simply staggering:

While those figures above are astounding, it is the personal stories that really are eye-opening. Imagine the prison guard who now goes to court on behalf of the people that he guards. The armed robbery convict goes on to become a paralegal to fight for the people she left behind in prison. The man that spent nine long years in prison is now attending law school in London. The list of accomplishments and people that have been positively touched by this program is simply incredible.

What is good for the individual is good for the greater society. Is every person that sits in prison innocent? Absolutely not. The Justice Defenders are less about getting innocent people exonerated (although they do that) than they are about addressing the broken justice system in Africa. Through education and training, community members can affect policy changes, assist those incarcerated, and strengthen their community.

A prison guard recently commented that he has never seen anyone involved with the Justice Defenders program wind up back in prison once they were released. Their model is simple. Train the defenseless regardless of their station in life. Whether they are prisoners, ex-prisoners, prison guards, judges, or anyone in a marginalized community, they can access legal training. This training shifts power to the powerless and thereby improves the overall justice system in Africa.

How Can You Help?

This organization was recently featured on the news magazine show 60 minutes. You can catch the show on Youtube. If you are completely outraged, and you should be, and you want to help, you can donate to this organization making a huge difference.

The Justice Defenders model was designed for the justice system in Africa, but it hopes that the model can be repeated in places like Thailand, where sex trafficking is a huge crisis, and other areas of the world were marginalized people do not have access to fair treatment in the justice system.

Making your donation to this great organization will ensure that the program can continue and that it will spread around the globe bringing hope to all of the people in conflict with the law and have zero support. Your donation is fully tax-deductible. You can make a difference by joining with the Justice Defenders and making your donation.